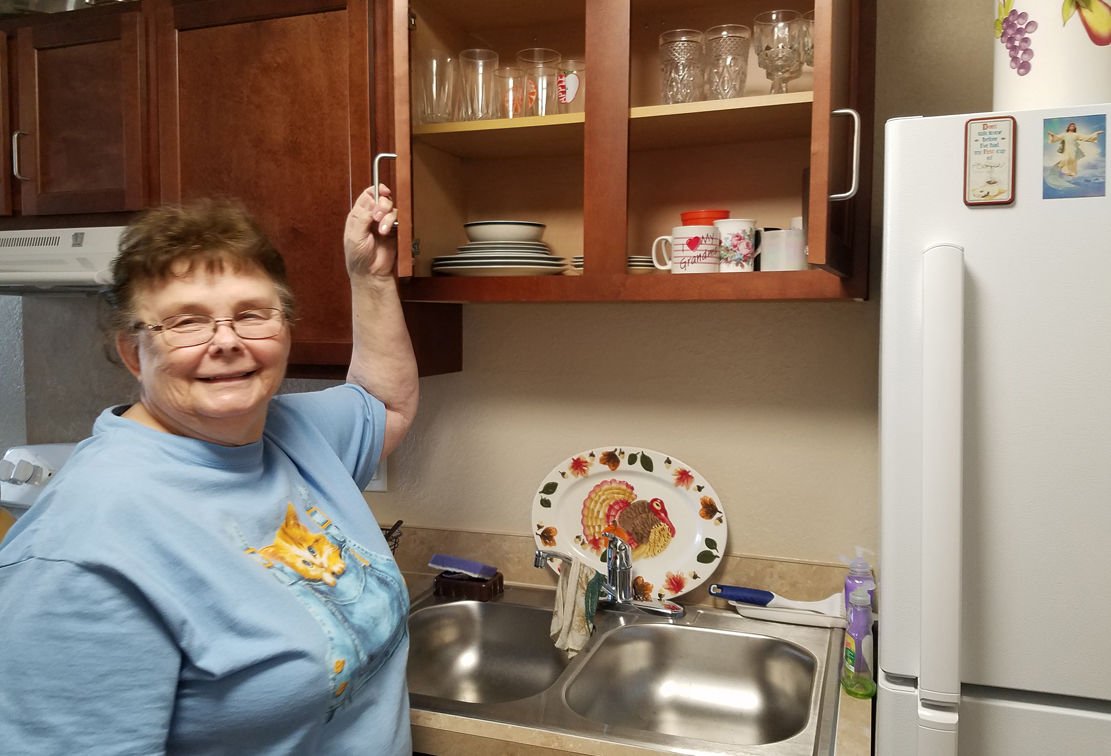 Chipola Apartments resident Catherine Weeden has moved temporarily into a fifth-floor apartment while her place on the third floor is being renovated. She's filled the new cabinets there with favorite coffee cups and other dinnerware. Deborah Buckhalter/Floridian.

The first major renovation in decades of Chipola Apartments in downtown Marianna is underway now, the work being done floor-by-floor, from the top down.

Fifth-floor apartments are undergoing their transformations now and residents are generally being put up in area hotels for about a month, on average, as their areas become part of the workspace, and then moved back. 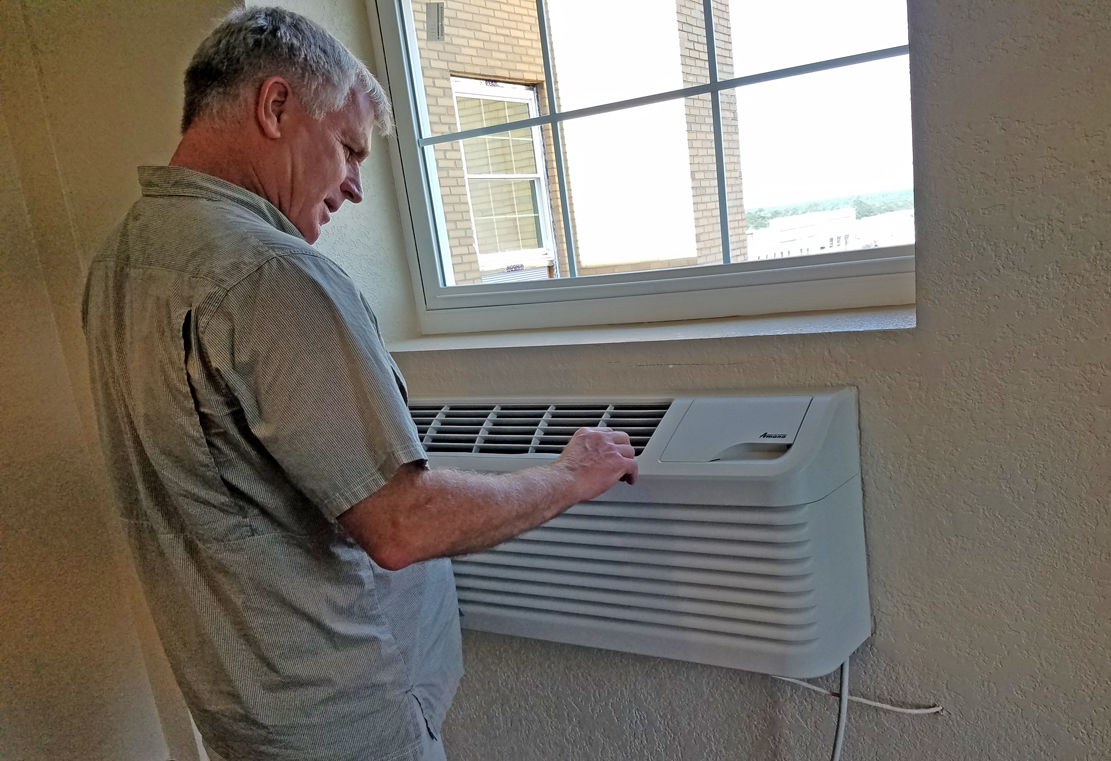 Renovation site superintendent Scott Schriefer adjusts a vent in one of the new air/heating units going into each dwelling at Chipola Apartments. Deborah Buckhalter/Floridian.

Catherine Weeden lives on the third floor, but she’s taken up temporary residence in one of the first apartments to be completed. It’s on the fifth floor and she’ll move back to her old place when it’s ready.

She’s pleased with the work that has been done.

“It’s good,” the 74-year-old said. “I didn’t have any huge problems but, like everything else, it’s reached a point where it needs renovation. They’ve done a great job.”

Weeden’s lived in the complex a little more than a year. Her old kitchen had a single sink. The new one has a double sink, making things easier when she washes dishes by hand. And if she’d rather, she can use the small dishwasher that was installed in the new place. She didn’t have one of those before. A new stove, new refrigerator, a fresh pantry and new cabinets are also part of the furnishings. And the flooring, she says, is fantastic. 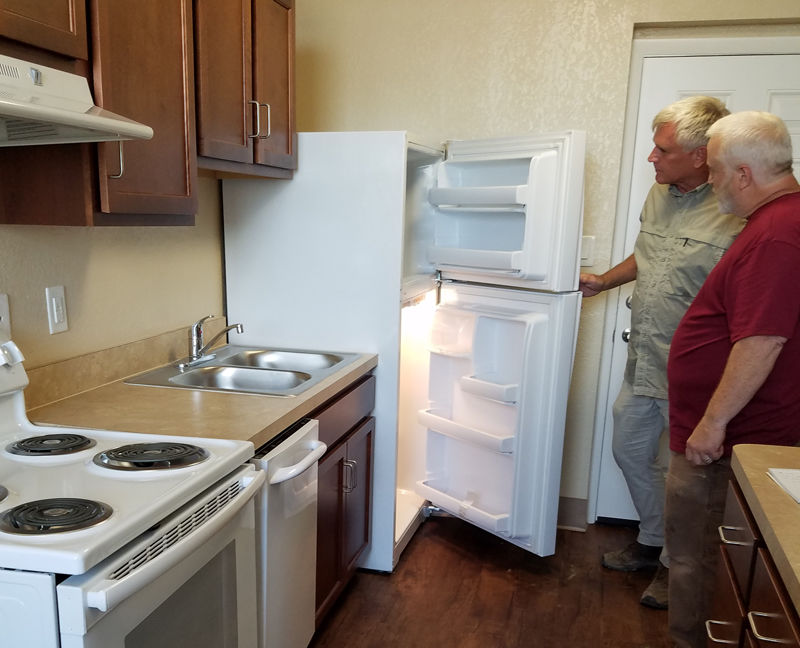 Gone is the aging living room carpet, replaced by new vinyl planking — styled like distressed farm flooring — that graces all the floor space in the apartment. Weeden says her minor stroke in 2014 made it difficult and dangerous for her to vacuum resistant carpeting anymore and that the new flooring solves the problem. The air seems fresher now and she’s loving the new paint job.

Her bathroom has a new toilet and a new bathtub outfitted with plenty of handrails to make bath time safer. 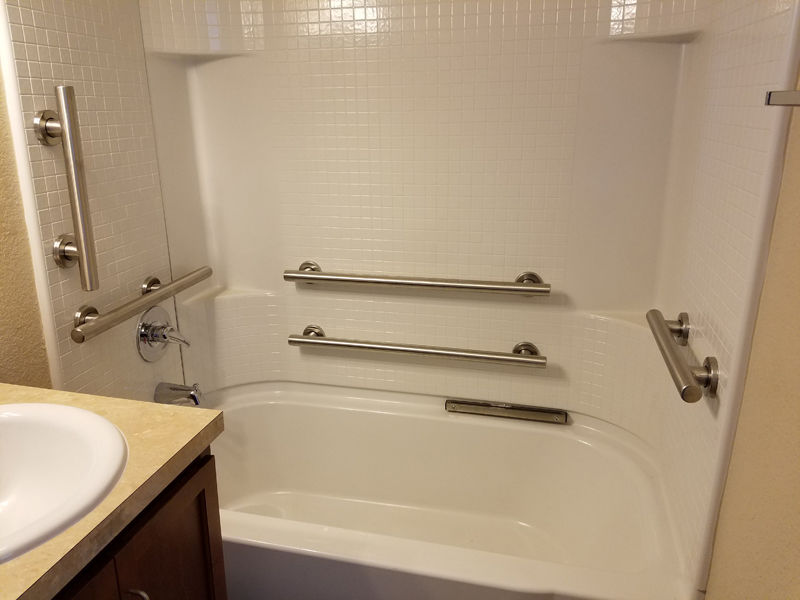 Residents of Chipola Apartments will have plenty of hand-holds in their new bathtubs. Deborah Buckhalter/Floridian.

And gone are the old window-unit air conditioners. They’ve been replaced by rectangular air and heat units installed on the wall below the windows, which have themselves been replaced by state-of-the-art energy efficient panes.

Weeden’s got a bigger, better closet now, too, and that was a welcome change.

As a person who earlier in life was a frequent real estate flipper, she appreciates, perhaps more fully than most, all that it takes to achieve such a massive transformation in just one dwelling, much less the 45 under roof at Chipola Apartments. Perhaps for that reason, she has a high threshold of patience for the process even though she’s very much awaiting the day she can move back to level three. She’d grown to love that place, despite the flaws that settle on a space that’s 90 years old and 40 years without a major facelift.

Weeden said she can’t wait to get back in there with a fresh new place to decorate. It opens up a blank canvas for new possibilities. It was a little harder to get excited about that when she first moved in, following a parade of countless former tenants into space that hadn’t had much done since Mary Sittman and some partner investors completed their months-long renovation of it and moved tenants into the apartments in 1980.

Sittman entered the scene in 1978 to take on the project. She and her group essentially saved the place from continued deterioration back then. It had once been the pearl of the Panhandle, and for more than its core mission as a hub of visitor accommodations. 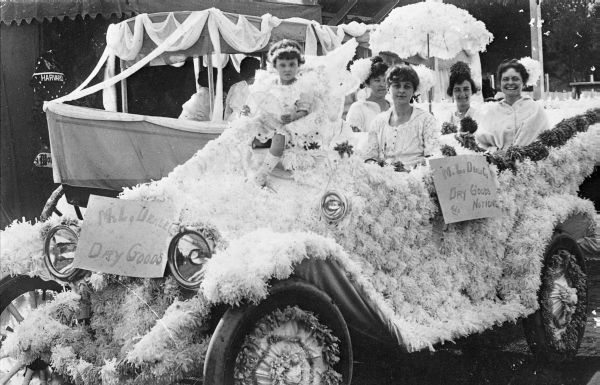 J.C. Corcoran and the Hotel Chipola

What is now Chipola Apartments was built in the late 1920s by J.C. Corcoran. He’d moved here from Chicago a few years earlier and did well. Corcoran came in at a time when new roads were being built to accommodate the infant, but fast-growing auto industry.

Corcoran founded the Marianna Lime Products Company and provided lime rock for the construction of many of those new roads, including U.S. Highway 90 as it took shape across northwest Florida. He also provided limestone for buildings. Sawed from lime deposits below the Jackson County soil, the limestone was used in places like the old First Bank building now owned by the City of Marianna and which serves as a community center/museum.

By the end of 1926, Corcoran’s next big project — construction of the Hotel Chipola — was complete. When he bought the property it now occupies, an 1880s-era wood-frame hotel was on the spot he wanted to use. So he moved that structure back a bit and would use it as an overflow annex, when there was no vacancy in the hotel. That old wood structure stayed in use for years after it had served his purpose, including service as a long-term apartment building, until it was torn down around 1960.

Meanwhile, the new Hotel Chipola had quickly become the place to stay for travelers moving through the area. Corcoran capitalized well on the fact that there were few quality lodgings between Pensacola and Tallahassee at that time. Ready customers coming in from rail, river, horse and buggy, and in more and more automobiles, were in the wings when he opened. It was a focal point in town during the Satsuma festivals of the late 1920s and during many other special events.

Eventually, a wing was added to provide a high-end dining and gathering place for guests and the community. That structure would later become, and remains, home of the Jackson County Floridan newspaper. In its earlier days, it served as a ballroom, a prom venue, and in many other capacities. It became a hub of community life.

Corcoran was also spreading his reach in other ways. He was an early “farm-to-table” pioneer, establishing the Hotel Chipola Dairy, the Hotel Chipola Farms, and the Marianna Fruit Company. The dining establishment’s customers were treated to much of the bounty from those subsidiary companies, where Charles Reiff served as vice-president, a director and the general manager.

The hotel and the additional enterprises flourished for years and employed many members of the community. It declined to some extent in the mid-20th century, as roadside motels and other lodgings popped up to compete on the landscape that lay between Marianna and Pensacola to the west and Tallahassee to the east. The development of Interstate 10 and accommodations along it didn’t help, either.

The hotel had been repurposed for various uses when Sittman came on the scene. The savvy businesswoman knew demographics-watchers had identified a shortage of appropriate long-term housing for independent older people in the region. She saw in the Hotel Chipola some promise for repurposing to meet that need. A person who could put hammer to nail as well as pen to paper, Sittman personally oversaw and physically worked on the project along with her crew. Each two rooms were opened up to make one apartment. That wasn’t an easy task — the poured-concrete walls resisted change. Nevertheless, the stubborn interior would undergo many structural changes.

Today’s renovations are quite the undertaking, as well. According to Vaughn Bay Construction’s site superintendent Scott Schriefer, the big job is putting several subcontractors to work and employing many individuals from the community. Area materials providers are also seeing business from the project.

Pat Crisp, who provided much of the information used here regarding the structure’s history, looks on all this with admiration in her role as president of the Chipola Historical Trust.

“Marianna is indeed blessed that there are investors who are continuing to make this wonderful 92-year-old building serve the community today, and especially in such a manner as to provide very nice accommodations for our elderly citizens — a much-needed service,” she said.

“When this building was completed, it was recognized as one of the best-built buildings in the state,” Crisp said.

“When Mary Sittman renovated it in 1978, she tells of the unbelievably difficult job it was to make each two hotel rooms into one suite for her proposed clients. The walls were poured concrete. Getting wires, doors, pipes, etcetera, etcetera, etcetera, into the individual rooms was a major feat.

“In 1926, it truly was a wonderful gift to Marianna when there was no place to stay on US 90 between Pensacola and Tallahassee, and it served the community very nicely for many years,” Crisp continued.

“The building still serves as a wonderful anchor for downtown Marianna. To see it being refurbished today is again a wonderful blessing for our city and our people. Marianna owes these investors a great debt of gratitude for what they are doing for our city and our elderly residents. ‘Thank you’ seems so inadequate for the gift they are giving us with their investment.”

The $5 million project by SP CA Apartments LLC, the new owner, is expected to be done by mid-November.

As community members and residents of the dwelling look forward to the completion of the project, Roger Crayton is among those who can hardly wait. He’s the maintenance man at Chipola Apartments and has labored long on behalf of the residents there.

Weeden say his caring spirit and ability to fix what’s wrong in the aged structure make him practically a superman in his craft and character. She’s thrilled — and he’s thrilled — that his job will in reality soon involve much more routine maintenance than daily field surgery.